COVID19: Australia falls to 3rd last on own global benchmark

Provocate’s upcoming 3rd VaxEnomicTM Forecaster shows Australia fell from 10th to 12th of 14 nations in June – overtaken by South Korea and Japan (see Table 1 below). The Federal Government had previously pointed to both as examples of countries Australia was performing better than (See PM comments here).

Provocate Managing Director Troy Bilsborough said Australia had now “free-fallen” seven places from 5th in April and was “failing against the Federal Department of Health’s own global measure of success”.

Mr Bilsborough – a former senior advisor to the Federal Health & Aged Care Minister – welcomed news National Cabinet would set an official herd immunity target, given there was a difference of 13 million jabs in arms between achieving the highest (95% HI) and lowest (70% HI) rates.

“The world’s reopening while Australia’s locking down. That’s not good for business in anyone’s books.

“We’re concerned the Federal Election guessing game could see Australia’s economy held hostage to political Russian roulette while we wait for the bulk of Pfizer stocks to arrive in October.

Since April, Australia has been overtaken Germany, France, Italy, Belgium, the European Union, South Korean and Japan. Currently only New Zealand and Canada are behind Australia at the same point in their vaccination rollouts, the latter of which is predicted to take over Australia within weeks. 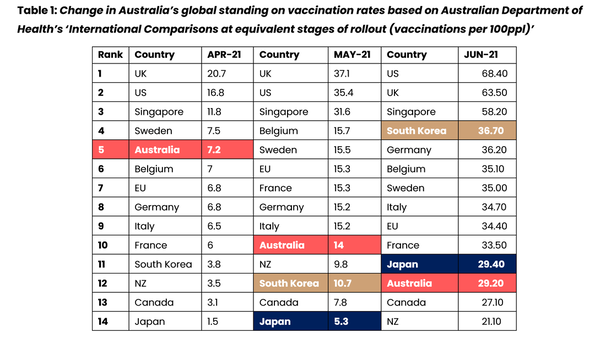